OH! Hewwo! The Teddy wanted to take a moment to say thank you to all of her fwiends. When I first joined social media earwier this year, I never weawwy expected too much to come of it. But then the Teddy started to make a few fwiends. And then a few more fwiends. And before I knew it, I had made so many new, wonderful fwiends all over the world. The Teddy would never have imagined that in wess than a year she would have so many fwiends!

The Teddy has had such a fun time wif her twitter and her bwog and her other social media, and tha’s due in warge part to my fwiends! The Teddy was even able to meet a couple of her new fwiends in bearson! It was so vewy fun!

The Teddy is wooking foward to another year wif all of her fwiends! I cant wait to see what kinds of fun adventures well all have together! *big hugs* The Teddy woves you all so vewy much! Your all the best Chwistmas pwesent a wittle teddy could ever ask for! Thank you all so much for being my fwiends! 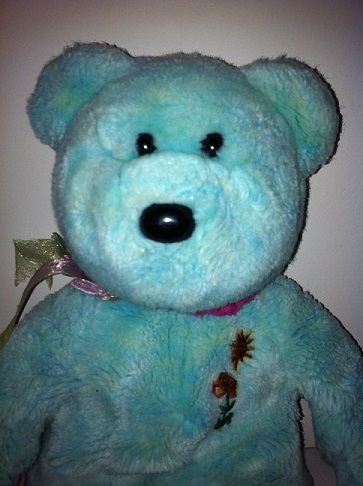 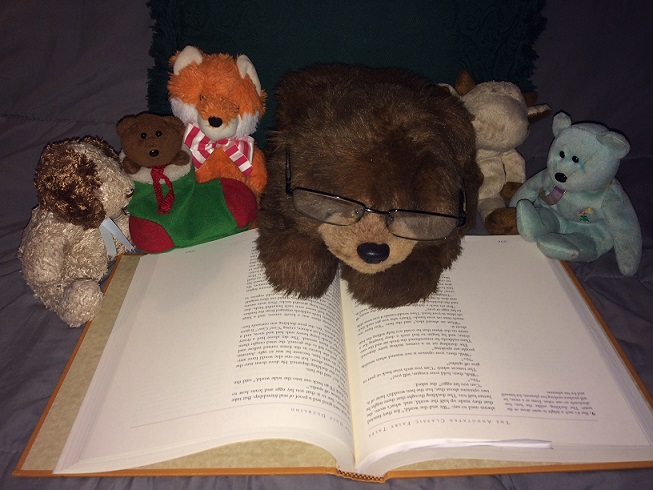 Hello, everyone! Thank you for joining me! I know it’s been a while since I last posted a story, but mommy and daddy have been terribly busy with work so daddy’s had no time to help me write. But here we are with a Christmas story! I do hope you enjoy it!!

The little teddy was gathering potatoes. She was trying to gather as many as she could. She was putting two to three potatoes in a box and then closing it. She would then wrap them up with wrapping paper she had made herself. She even made her own bows to top them off. She was quite proud of herself! These boxes of potatoes were to be Christmas presents for all of her friends.

The little teddy was to meet all of her friends at the Dee’s cave. She had borrowed a wheelbarrow from her new farmer friends, Sonning, Endon, and Hanley. She carefully loaded up all of the presents into it and headed off to the cave. She couldn’t wait for her friends to open their presents!

The little teddy was about halfway to the cave when she heard a faint meowing. She looked around until she spotted a cat up in a tree. She walked over to the tree. “OH!” she called up to the cat, “Hewwo!” The cat looked down and smiled. “Hi,” she answered the little teddy, “My name Cweo!” The little teddy waved to Cleo. “Oh! I’m going to a Chwistmas get together wif my fwiends! Would you yike to come?” The cat turned her head curiously. “But mew doesnt reawwy know me. Why would mew invite me to go wif you?” The little teddy smiled. “Because you seem super nice and that’s enough for me!” she excitedly told her.

So the little teddy continued on her way to the Dee’s cave with her new friend. “So where do you wive?” the little teddy asked Cleo, as they walked. The cat purred and smiled. “I just moved to these woods,” she told the little teddy, “does mew live here too?” The little teddy giggled. “Oh no,” she answered, “I wive wif my mommy and sibwings in a house just outside of the fowest.” Cleo nodded. “But mews fwiends live here in the woods?” The little teddy nodded. She told her about all of her friends that she had made over the past year.

It wasn’t long before the two new friends reached the Dee’s cave. Zombie Jem came out to meet them. “PammyBear!” the zombie exclaimed as he hugged the little teddy, “And who might this be?” He nodded and smiled at Cleo. The little teddy clapped her paws together. “OH!” she answered happily, “This is my new fwiends Cweo! She wives in fowest now!” Zombie Jem smiled. “I’m very happy to meet you,” he said as he extended his hand. Cleo reached out her paw and shook the zombies hand. “I is vewy happy to meet mew too,” she told him, smiling.

For the next few minutes, the little teddy introduced Cleo to all of her friends. The two cave bears, Dee and Little Dee were more than happy to welcome Cleo into their cave. Inside were more of the little teddy’s friends. Cleo got to meet Mickey and T, as well as Fuzzy, who apparently came from outer space. Even Teddy Tedaloo showed up for the holiday fun. But he was busy helping to make food for everyone and didn’t have time to do more than say a quick hello.

The little teddy suddenly remembered her presents. Everyone had agreed on no presents, but she just couldn’t help herself. She ran outside and grabbed the wheelbarrow. She pulled it into the cave. “OH!” she called out to her friends, “I have pwesents for evwyone!” All of her friends gathered around the teddy, curious as to what she had gotten them. The little teddy grabbed the first gift from the wheelbarrow. “The first pwesent is for T!” she handed the mischief maker a box. She then handed the rest of gifts to her friends. “And the wast gift is for Teddy Tedawoo,” she said happily, handing the last box to her news bear friend.

Before everyone could start opening their presents, the little teddy realized that she didn’t have a gift for her new friend yet. “OH! Does anyone have a bag I could bowwow, pwease?” she asked her friends. Little Dee jumped up excitedly. “We does have plenty of bags,” he told her happily, “But why does you need one?” The little teddy leaned in and quietly whispered that she needed it to put a present for Cleo in. “That does be really nice of you,” Little Dee said as he gave the little teddy a nice bag. She quickly put in a few potatoes she had brought as a snack and handed the bag to Cleo.

“Oh, mew didn’t have to get me a pwesent!” Cleo said as she took the bag from the little teddy. “Of course I did,” the little teddy told her, “Your my fwiend!” The little teddy watched excitedly as all of her friends began to open their presents. She couldn’t wait to see the looks on their faces when they saw the potatoes she had so carefully picked out for them. Zombie Jem was the first one to open his present. “Oh, thank you so much PammyBear!” he exclaimed as he pulled three large potatoes from his box.

The little teddy watched as the rest of her friends pulled potatoes from their boxes. Each and every box had three potatoes the she had specifically picked out for each of her friends. Even her new friend Cleo got her own special potatoes. For the ones the little teddy gave her were the ones she was saving for herself. The biggest, yummiest ones she had! But she was more than happy to give the up for her new friend!

After everyone had finished opening their gifts, it was time for food. Teddy Tedaloo had made a variety of potato dishes for everyone. The little teddy was first in line and got herself a little bit of everything. There were baked potatoes and mashed potatoes, fried potatoes and hash browns. The little teddy was excited to try them all. And all the food was delicious! “I didn’t know you could cook so well, Teddy Tedawoo!” she told her friend as she took another bite of her baked potato. “That’s Tedaloo,” the news bear replied, “And cooking is actually one of my favorite hobbies.”

After the food, everyone sat back and enjoyed some music that Mickey and Zombie Jem played for them. Cleo sat next to the little teddy. “Mew has some talented friends,” she told her, “they’re vewy good!” The cave bears, Dee and Little Dee came over and sat with them. “Yes they does pway vewy well,” Dee said with a smile. “It was very nice of them to play for us all,” T said as he came to join them. “Oh yes,” the little teddy nodded, “it’s gweat to hear them pway!”

Once Mickey and Zombie Jem had finished playing, it was time for everyone to head home. Everyone went around and said their goodbyes for the night. The little teddy hugged each of her friends and then left the cave with Cleo. The two walked towards the forest. “Thank mew so much for bringing me wif you,” Cleo said happily as they made their way back to the tree where they had first met. “Of course!” the little teddy told her friend, “I’m vewy gwad you had fun!” Cleo giggled. “I had wots of fun wif mew and mews fwiends!” she told the little teddy.

Once they reached Cleo’s tree, the two friends hugged and said goodnight. The little teddy then continued her walk home. She smiled as she thought back to all the amazing friends she had made this year. She loved all of her friends and was so happy to have met them all. She couldn’t wait to see what kind of fun and adventures would await her and her friends next year. She was sure she would make even more friends too, and she couldn’t wait!

Well, that’s it for our story. I do hope you enjoyed it! From my family to yours, we wish you all a very happy holiday! Thank you so much for stopping by to read my newest story!

I'm Big John Bear - BJB or Beej to my friends :-) I'm a vintage Pedigree bear who loves going on adventures!

The Fangirl’s Guide to Happiness

Self-help with a fandom twist

a bear and some bears

Two small bears that go on long and distant adventures... in the garden.

A small bear from the #TeddyEmbassy

A teddy bear's world of wonder.

The Postal Adventures of Morris Mouse

A Journey of Friendship

A Writer-Bear for Our Befuddled Times

I'm just a cute wittle teddy who woves her famiwy and fwiends.

A daily selection of the best content published on WordPress, collected for you by humans who love to read.

The best longform stories on the web